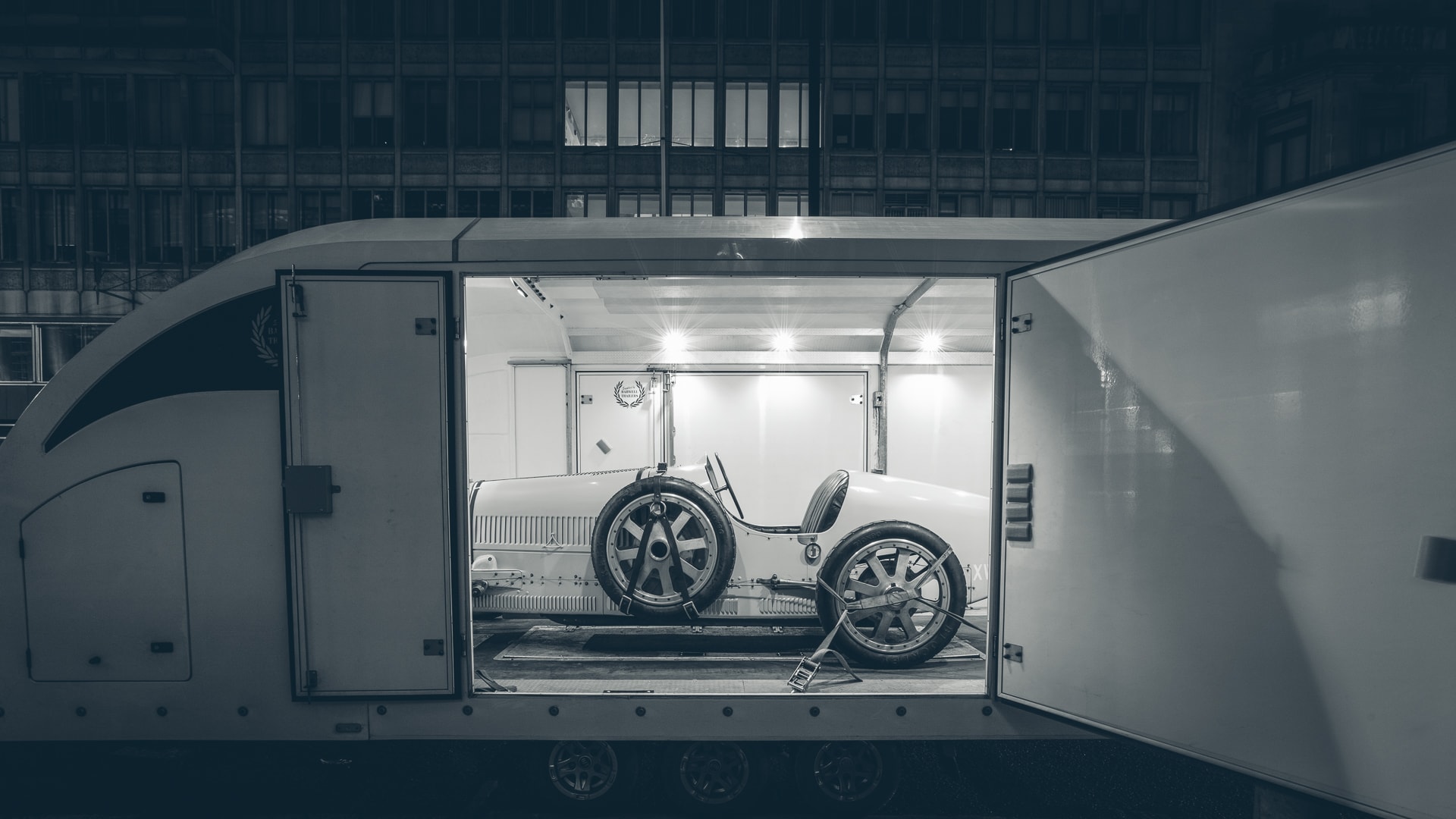 [vc_row][vc_column][fwp_borano_title title=”WHY DO I DO THIS EVERY DAY?” tag=”h3″ title_pos=”text-center” separator=”1″ separator_pos=”separator” title_color=”” extra_class=””][vc_column_text css=”.vc_custom_1467810347562{margin-bottom: 0px !important;}”]In a previous life, I spent the majority of my week ploughing around the country and regularly travelling into London on the M40 motorway. Back then, as you approached the M25 heading southbound, there was a large field on your left with a copse of trees occupying a small hill. A fence surrounding them had the proclamation above in three foot tall graffiti painted across it and I often pondered that question while stuck in the crush hour commute.

Roll forward a significant number of years and I loathe it when I have to join the ranks of anxious people who pound the highways on their way to the office. I know all too well that you have your routine and suddenly having a new face (me) inching forward in front of you and not travelling a friendly depth of bumper into the car in front riles you up no end. So, forgive me when I now have the opportunity afforded me by getting up in the wee small hours, travelling into London and getting my work done in time to be happily smiling away on the outbound city arteries while you all begin to clog them up on your way in. I know. I’m being smug. Indulge me.

You see, for me, having an early morning call isn’t an issue. I like it. I like seeing a day wake up, a city yawning in to life or watch a sunrise mute the moon into a new day. Even if my wife is less enthusiastic.

A morning like this happened recently as I needed to get to the Royal Automobile Club in Pall Mall at 5.00am to intercept a rather beautiful Bugatti T35. This particular model belongs to Simon Kidston and we wanted to document the behind the scenes events of how you get a car in and out of their stately atrium. 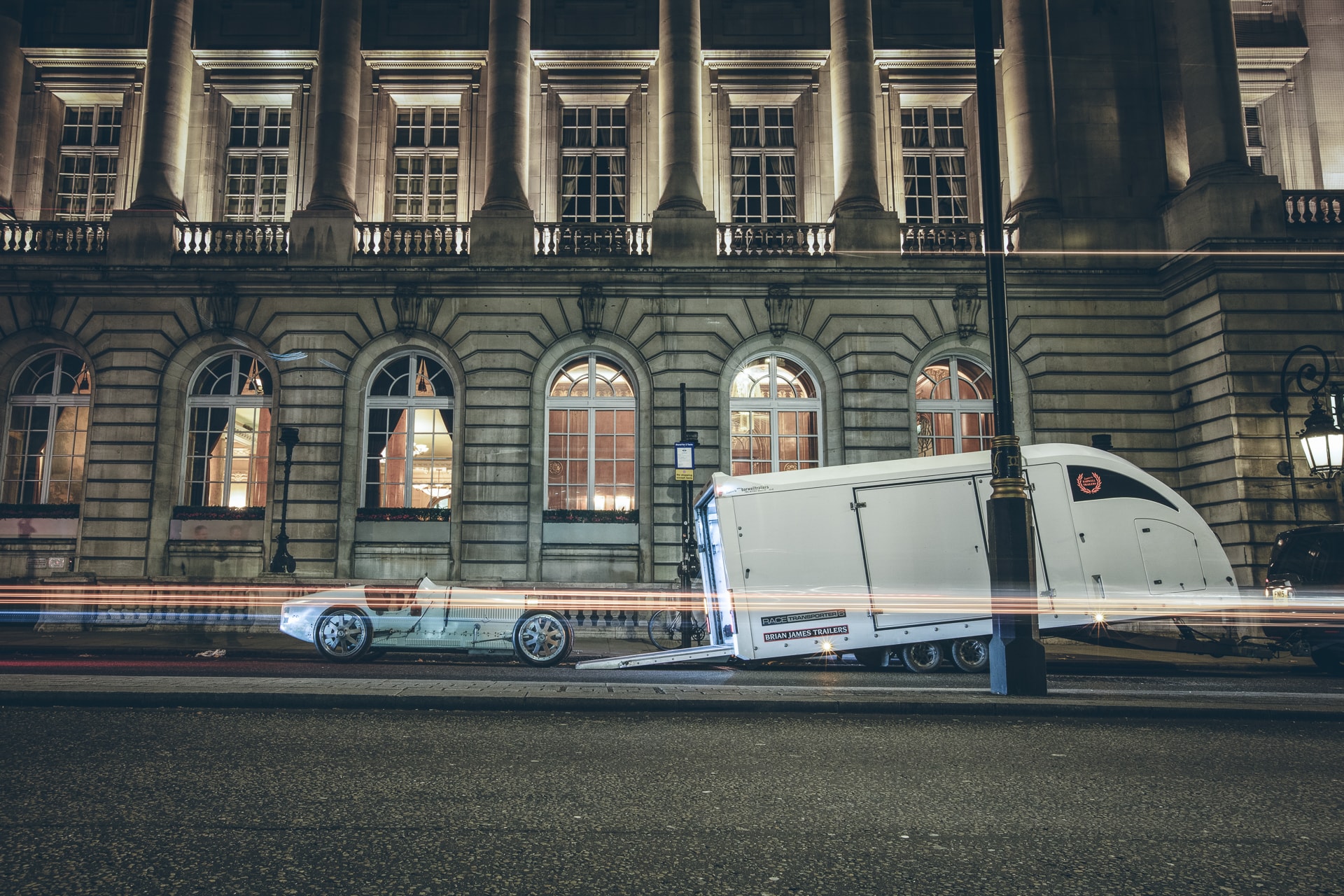 First off, there was a Jaguar once owned by Sir William Lyons to be removed. A maintenance crew sets about erecting the metal ramp to cover the stairway while the doors are taken off their hinges. Yep, no fancy goods in, you simply drive in and out of the front door. 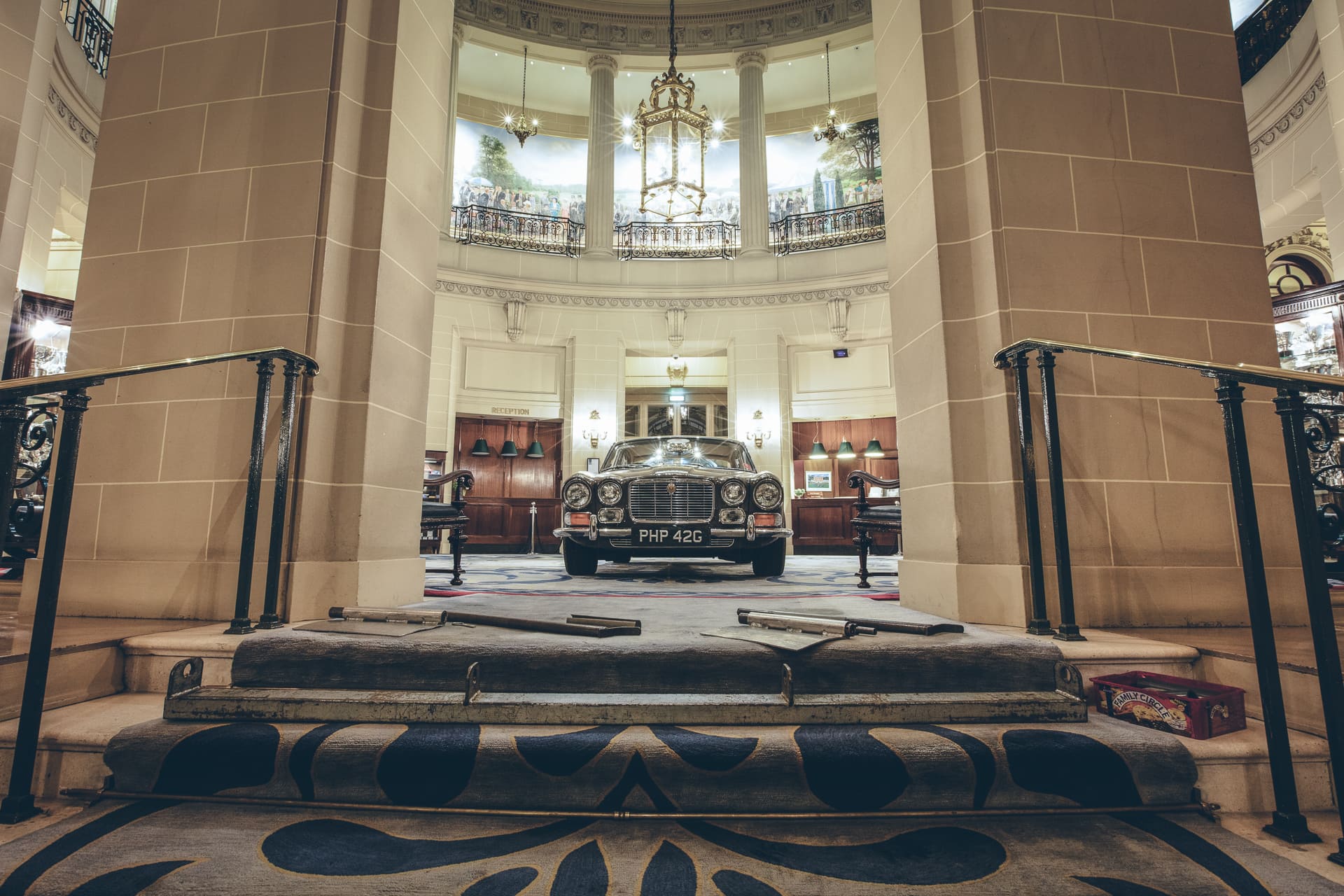 With it all starting to feel slow at first, the next thing you know, traffic is stopped and out comes the Jaguar, driven, not pushed. Unfortunately, the Bugatti would be somewhat louder and, with the neighbours opposite understandably not wishing to be woken, the T35 would be rolled into the space. I can testify that it really doesn’t take that long at all and so I nearly got caught out and stuck behind the car as it was pushed in. Scrambling inside and up the ramps, I managed to get in front of the car and the guys just in time. 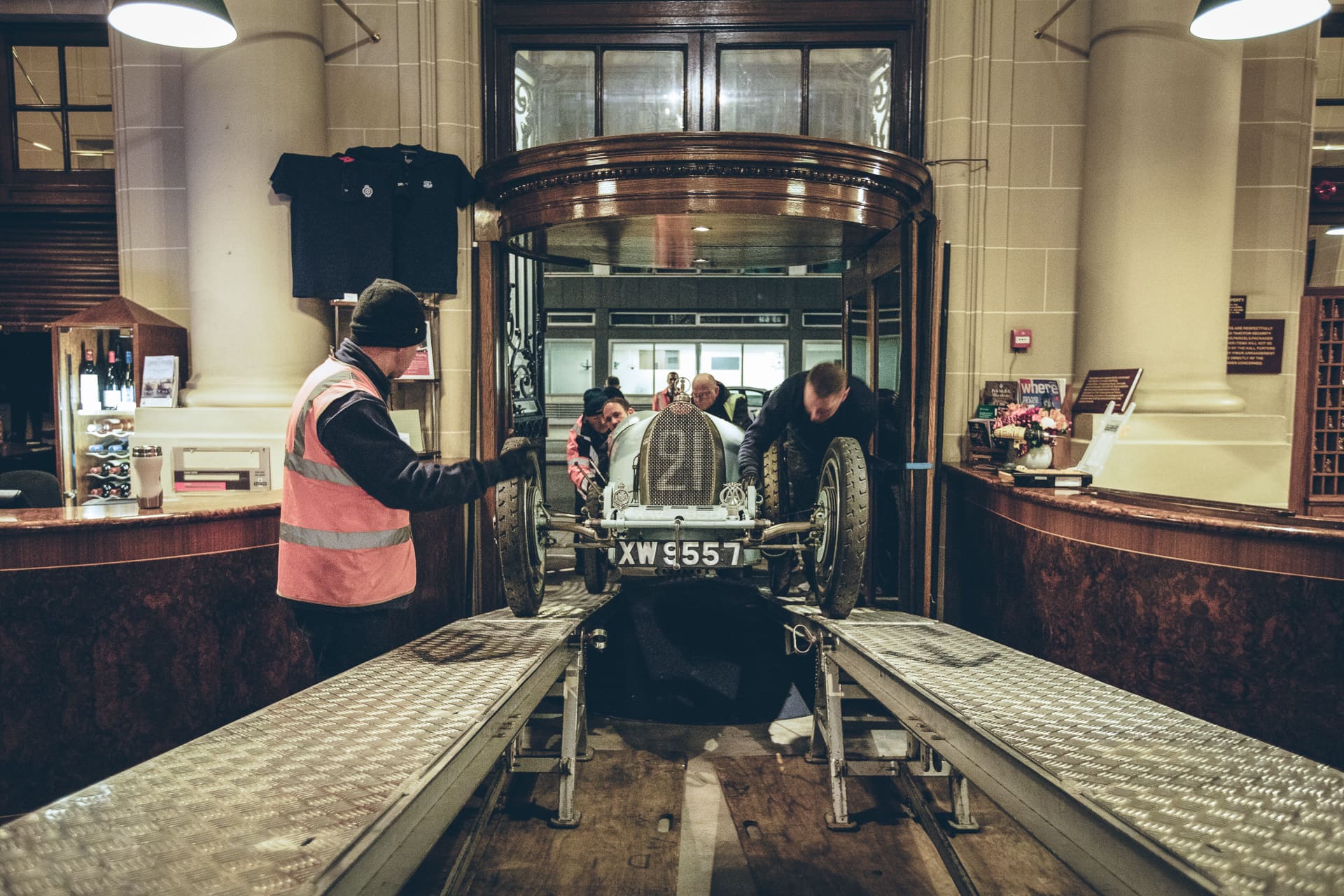 Low light level was a challenge off-tripod but there wasn’t the luxury of additional lights, especially as the cleaners were halfway through their chores and members would start to arrive around 6.00am. 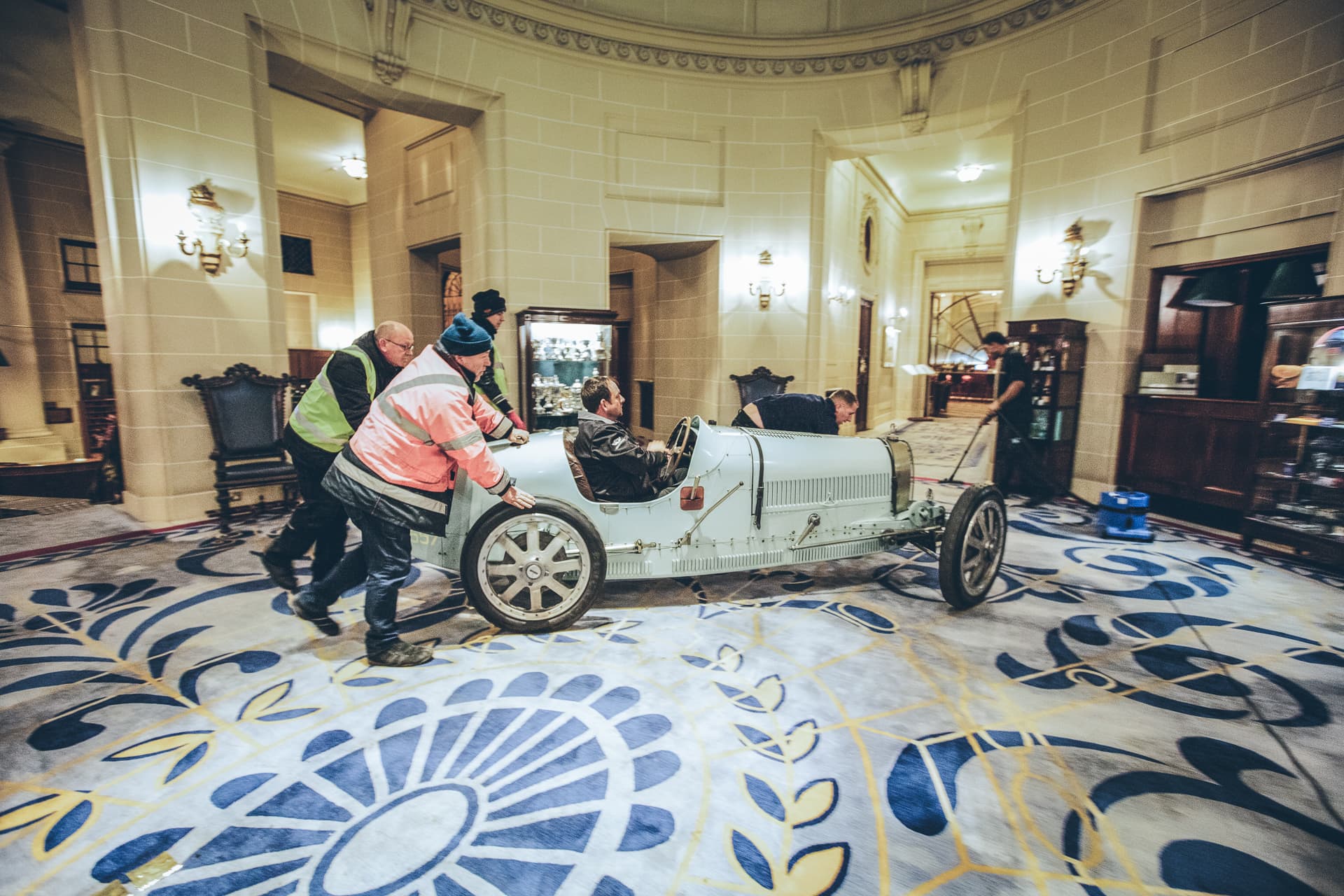 Contrary to the club wanting cars on an angle, we set about putting the car in line with the carpet it stands on but with the large pendulum light overhead, it didn’t just look pretty sat in that space, it just belonged. 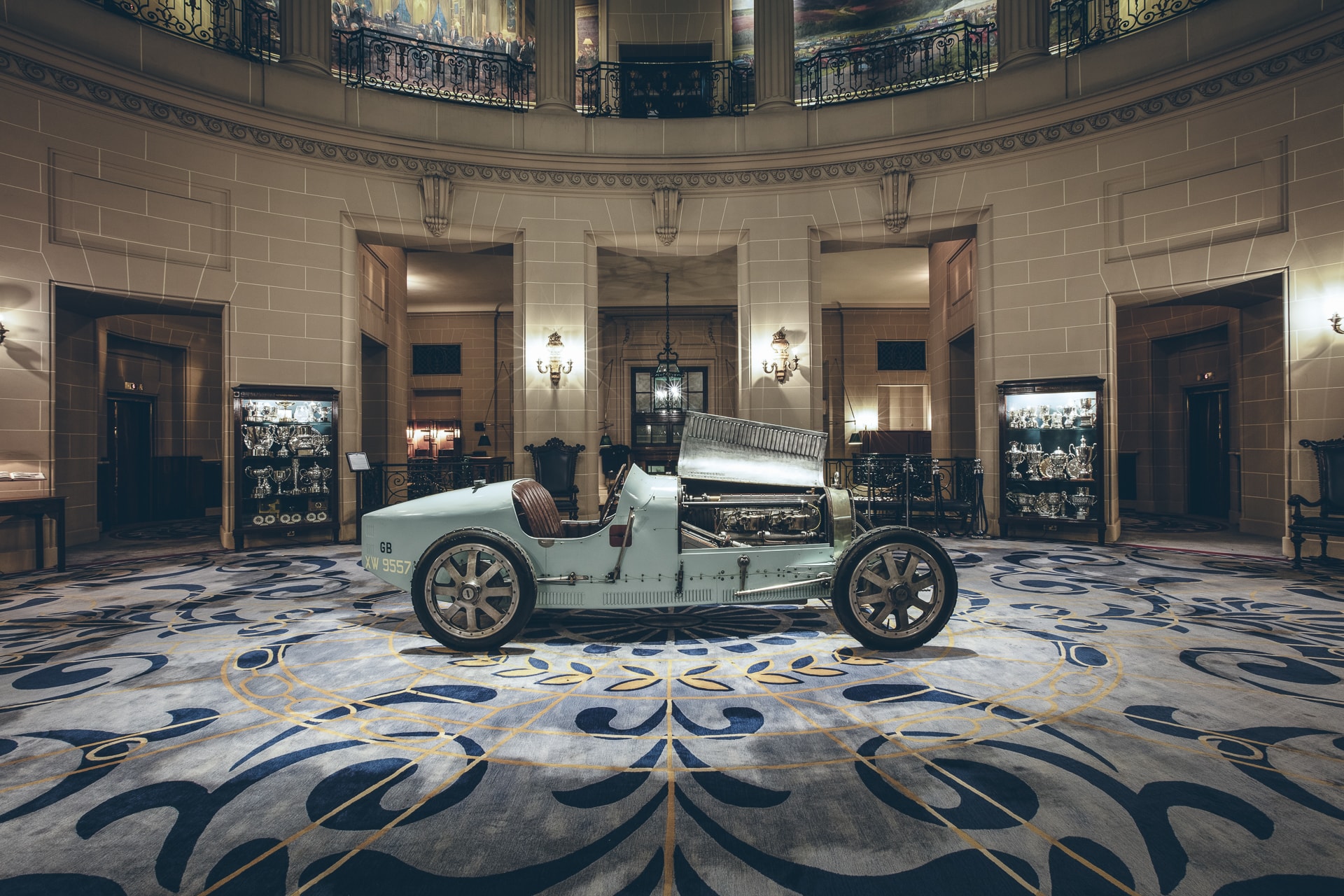 Running around we got as many shots as possible. We even decided to grab a few outside with the revolving doors now re-attached. We span them around and shot through them to see the car lurking inside. 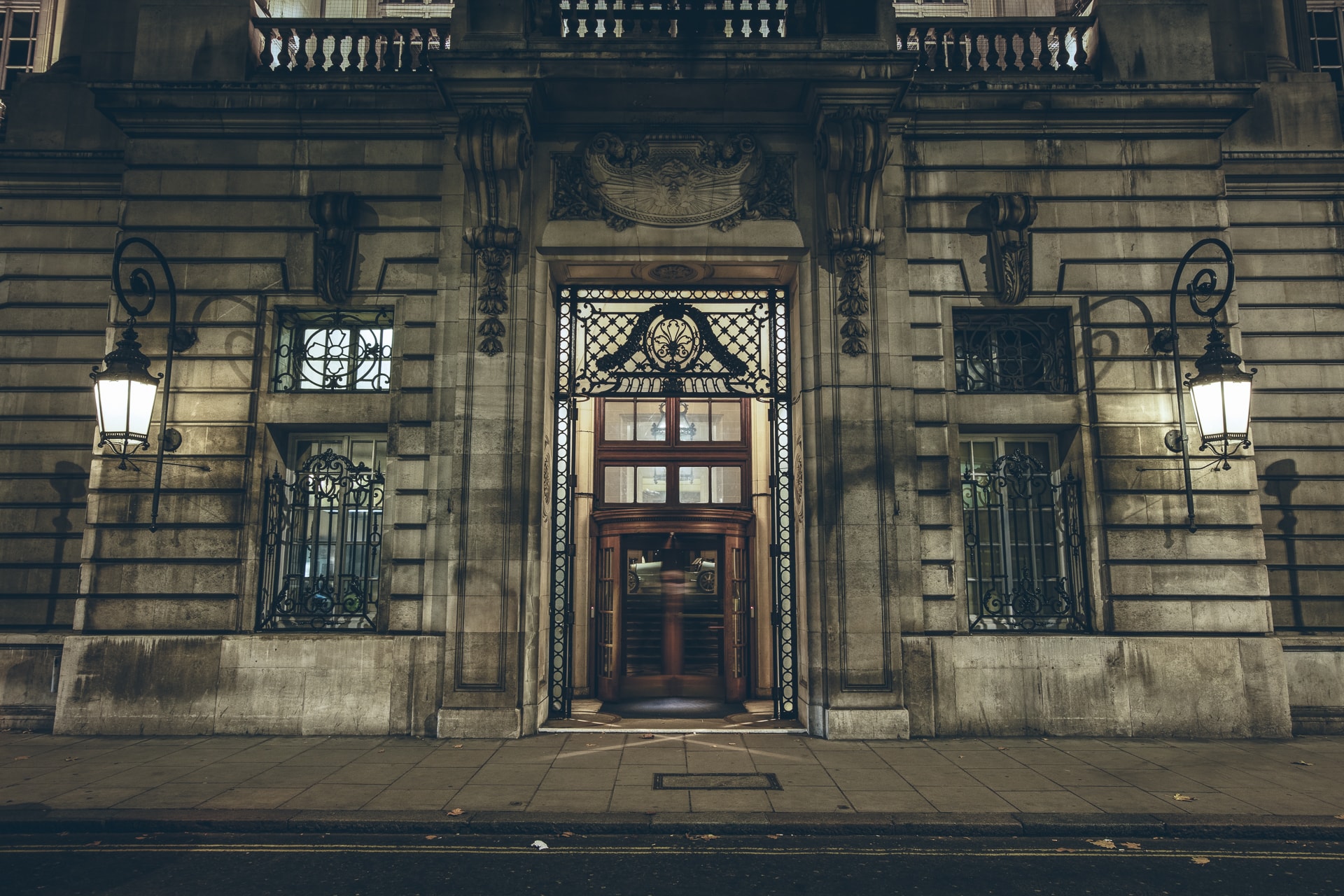 You always wish you could have more time, more light or more angles to play with, but I have to say that driving back out of the city that morning while the A13 slowed to a crawl, I remembered that M40 graffiti once more. Unlike in my previous life, I now have an answer. 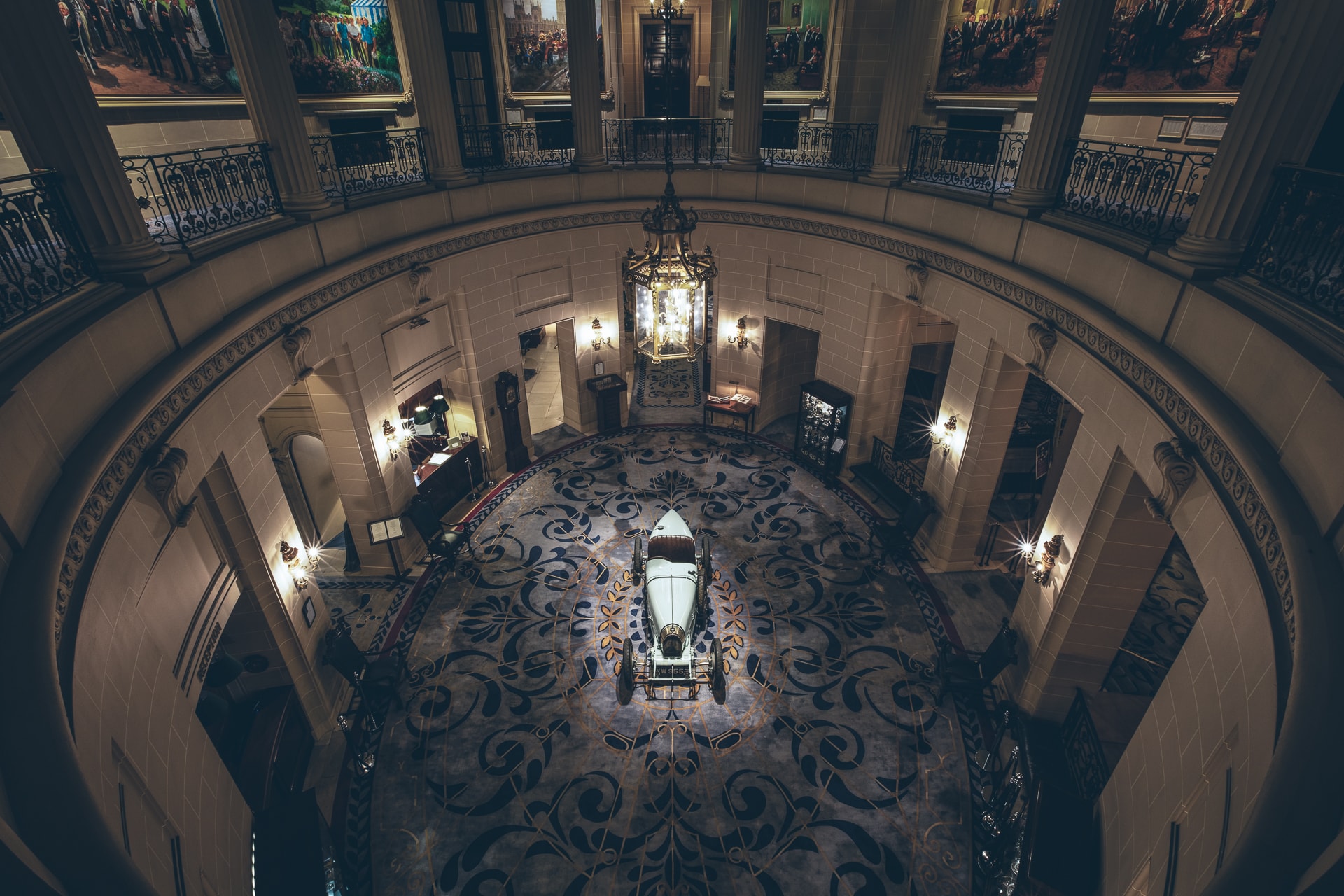